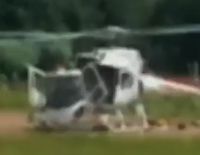 Some observers speculate that a bad episode of ground resonance may be to blame for the violent self-destruction of a medevac helicopter as it landed in a field in Para, Brazil. Few details are available about the incident, which reportedly took place Wednesday — the same day video of the accident began spreading, online. The helicopter appears to be a Eurocopter A-Star AS350BA. Some reports state that there were four aboard — two pilots, a doctor, and a nurse — and all escaped serious injury in spite of the helicopter engaging full-flail mode. Several accounts repeat that the aircraft suffered excessive vibration while airborne and that vibration developed into destructive ground resonance after the aircraft landed. Generally, ground resonance will resolve itself if the pilot is able to respond quickly by returning the aircraft to hover.