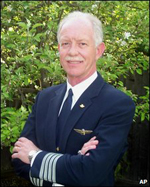 The national media covered Chesley Sullenberger’s public appearance as the guest of honor at a homecoming celebration held Saturday in the small California town where he and his family live, but may not have mentioned the interesting accolades he won from one aviation organization. The Seaplane Pilots Association is presenting Sullenberger with an honorary lifetime membership in the association. The group is also offering him “a complimentary seaplane rating course” at Jack Brown’s Seaplane Base in Winter Haven, Fla. Back in his hometown, Sullenberger was named an honorary police officer and presented with the key to the city. Some 3,000 people gathered to see him proclaim on behalf of his crew: “We were simply doing the job we were trained to do.” He also thanked the crowd for its “incredible outpouring of support.” Also over the weekend, investigators made an initial assessment of the left engine that briefly powered Sullenberger’s most famous flight and was recovered from the Hudson River on Friday afternoon.

According to the NTSB, the engine showed “evidence of soft body impact damage,” but failed to supply visual evidence of “organic material” (read: birds) following its unscheduled powerwashing in the Hudson River on Jan. 15. The left engine, previously attached to the US Airways Airbus A320, was dented on both the spinner and intake lip. Plus, five booster inlet vanes were damaged and eight outlet guide vanes were missing. Both engines will now be shipped to Cincinnati where investigators will oversee a complete teardown and use “advanced technology” to detect the existence of the aforementioned organic material.