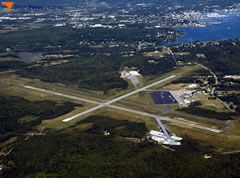 Three people aboard a Cessna 172 were killed after the aircraft hit a pickup truck on the runway of Knox County Regional Airport near Rockland, Maine, late Friday. Airport Manager Jeffrey Northgraves told Bangor Daily News the 172 was taking off just before 5 p.m. when it hit the front of the truck, which was crossing the runway. The aircraft crashed in bush about 300 yards beyond the runway and caught fire. Bystanders reached the crash site and tried to pull occupants from the aircraft but the fire was too intense. The aircraft was consumed and the registration marks destroyed, complicating identification of the occupants. It was not a local aircraft, Northgraves said.

The driver of the pickup was not injured. He has not been identified, but Northgraves said he is a pilot and was authorized to drive on the airport. The vehicle is not owned by the county and the driver is not a county employee. Northgraves said vehicles operated on airport property have to be equipped with a radio monitoring the local frequency but he said it’s not known whether there was any radio communication between the aircraft and truck before the accident. The runway was cleared to allow a scheduled airline flight to land about two-and-a-half hours after the crash and an FAA investigator arrived shortly after.