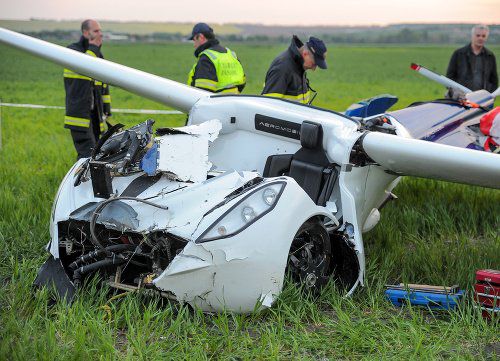 During a test flight on Friday, Aeromobil’s flying-car prototype crashed, after the pilot, designer Stefan Klein, pulled the parachute. Klein suffered no injuries, according to Aeromobil’s statement, and the airplane was “only partially damaged.” News photos show the aircraft apparently mostly intact, with some damage to the fuselage. “Experience and data from the test flight will be evaluated and implemented in further development of the flying car,” the company said. According to news reports, Klein, 54, was taken to a hospital for examination after complaining of back pain, but was later released. The company has been flight-testing the aircraft since last October.

The “test program will continue,” Stefan Vadocz, an Aeromobil company official, told AVweb in an email on Saturday. “Currently we are collecting the data from the flight and we will share the details when they become available,” Vadocz wrote.

“In the process of developing new vehicles, especially in the prototype phase, the possibility and likelihood of an unexpected situation is a natural part of the testing program. This is a learning period which allows us to detect and subsequently refine our design. It is necessary to test the prototype in every way possible to establish its limits and to improve on them. The flight recording details will help us learn from the data and improve the performance of the vehicle prior to our next flight test.

“During one of the test flights that took place onMay 8,2015, the inventor and test pilot, Stefan Klein, encountered an unexpected situation and activated the advanced ballistic parachute system in an altitude of approximately 300 meters (900 feet).

“The system has proved itself fully functional andlanded the entire vehicle without any injury to the pilot. The detailed data and overall experience from this test flight will be thoroughly analyzed and the results will be used in the ongoing R&D andimprovements of the prototype. Testing of the current prototype 3.0 and further product development will continue after thereplacement of the damaged parts.”