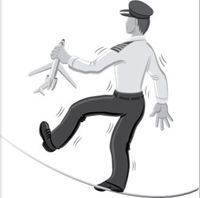 Airline pilots are seeking to take back wages, benefits, and pension concessions they gave up to save their employers from bankruptcy following the 2001 terrorist attacks, but airlines allege the pilots aren’t playing fair. US Airways filed suit last week because the company believes its pilots have illegally caused as many as 10 flight cancellations each day since May. The union says pilots are being forced to fly unsafe aircraft. At Continental, last month saw an unusual spike in the number of pilots calling in sick, which the carrier says caused it to cancel 30 flights. Continental’s pilots union says it has concerns about staffing shortages. Some pilots at major carriers say they have seen their pay cut in half over the past decade. Unions are concerned that if the airlines have their way, negotiations to set new pay and benefits packages may take a long time.

A 25-year veteran captain for US Airways cited by The Wall Street Journal told the newspaper that over the past ten years he’d seen his pay fall from $225 per hour to $125. Along with that, his defined pension plan was terminated and the $100,000 per year he’d expected as retirement income at age 60 has dropped to $28,000 per year beginning at age 65. A United pilot told a similar story, saying his pay had been cut in half and his pension was lost when the company fell into bankruptcy. His prospects may be considerably better than the 1,400 pilots United has yet to call back from furlough. According to Kit Darby, a pilot benefits consultant, major carriers have generally lowered both pay rates and thinned the ranks of pilots over the past decade. Darby told The Wall Street Journal that along while those trends have held for the majors, discount carriers have seen their ranks double over the past five years.