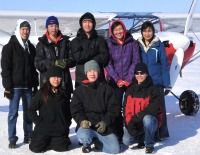 A group of students at Chevak High School, located on the remote Alaskan tundra, worked together over the winter to build a Rans S-6s Coyote II experimental aircraft from a kit, and flew it for the first time on March 24. “The aircraft was beautifully built and was obviously the pride of the aeronautics class at the school,” John Davis, a Designated Airworthiness Representative who flew in from Anchorage to inspect the airplane, told the Alaska Dispatch. Ryan Walker, a teacher at the school who is a CFI and A&P, bought the kit and guided the class as they built the aircraft. The project, which was sponsored by Build A Plane, AvSTEM, Rans, and others, was inspired by a similar project in nearby Hooper Bay, a Yu’pik Eskimo village.

“When news struck Chevak that the kids at Hooper Bay were getting to build an airplane, kids at Chevak actually borrowed their family’s snow machines and traveled the 20 miles each way to Hooper Bay to help,” Lyn Freeman, president of Build A Plane, told AVweb this week. “That caused a lot of interest at Chevak to follow in Hooper Bay’s footsteps.The next summer, during the couple of months that the ocean is free of ice and a barge can get into Chevak, a big box was unloaded, a box containing the Rans airplane project.Now the Chevak kids had an airplane to build!” Ryan Walker, the teacher who guided the project, will be participating in Build A Plane’s Teacher Day at EAA AirVenture in Oshkosh this summer, on Tuesday, July 26, and the Coyote aircraft will be on display at the show. “Any teacher can register for this free event at BuildAPlane.org,” Freeman said.Teachers also get a free lunch and free admission to AirVenture for the day.