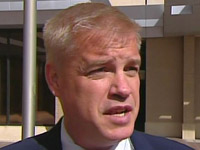 Speaking for the Allied Pilots Association, spokesman Scott Shankland told WFAA TV in Dallas/Forth Worth, Thursday, that incidents like the Thursday death of a pilot aboard Continental Flight 61 will be more likely, and he knows why. Shankland told the TV station, “this is the reality of what we’re going to be dealing with on an increasing bases as a result of the increase of retirement age to 65.” Pilot Craig A. Lenell died at the age of 60 while serving as captain aboard the Continental flight. He was examined on the flight by a 72-year-old cardiologist who attempted to revive the captain with the aid of an onboard defibrillator (mandatory since 2004). Of the multiple events involving a pilot’s incapacitation or death while piloting a commercial airliner that AVweb reviewed for this story, none resulted in additional fatalities as a direct result of the flight losing a pilot — a point with which Shankland concurs. He did, however, point out that losing one pilot on a domestic airline flight would more often than not leave the flight in the hands of a sole remaining pilot who would be required to then declare an emergency and land soon as practical. But, for Shankland, and presumably APA, there are other considerations.

Speaking of the benefits of a two-pilot flight deck and multiple systems redundancy, Shankland said that “when you lose one of those pilots, you’ve lost some of that redundancy.” About two years ago, the FAA increased the mandatory retirement age for pilots from age 60 to age 65. The rule also requires that the other pilot be under the age of 60. Shankland had been publicly speaking out against the change since at least mid-2007, when another Continental pilot died while en route from Houston to Puerto Vallarta. As he told PBS then, “It is a statistical fact that, as people get older, you start having more of these events, both the sudden catastrophic events and the subtle effects of aging. So it’s not maybe these things are going to occur. I mean, these already are occurring, and they will occur with more frequency as people continue to fly for a longer age.”