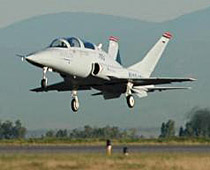 ATG, which hopes to one day see production of its tandem-seat twin-turbofan executive Javelin jet, announced yesterday that it will halt the jet’s development. “Due to circumstances beyond ATG’s control, it is unlikely that adequate funding can be secured in a timely manner,” the company said through an e-mail, Tuesday. It seems a 12-month search to secure funding for the high-performance business jet/military trainer has come up short and the company says plans for its future will be decided “after proper communication with our strategic business partner.” In January, ATG announced that Action Aviation had placed firm orders for 40 Javelin jets worth $120 million for delivery over a period of eight years from certification. The $2.75 million Javelin jet had been designed to cruise near 500 knots and stall near 90 knots, powered by two 1800-lb-thrust Williams FJ33 engines providing a long- range economy cruise near 1,000 nm. A prototype aircraft first flew in the fall of 2005.