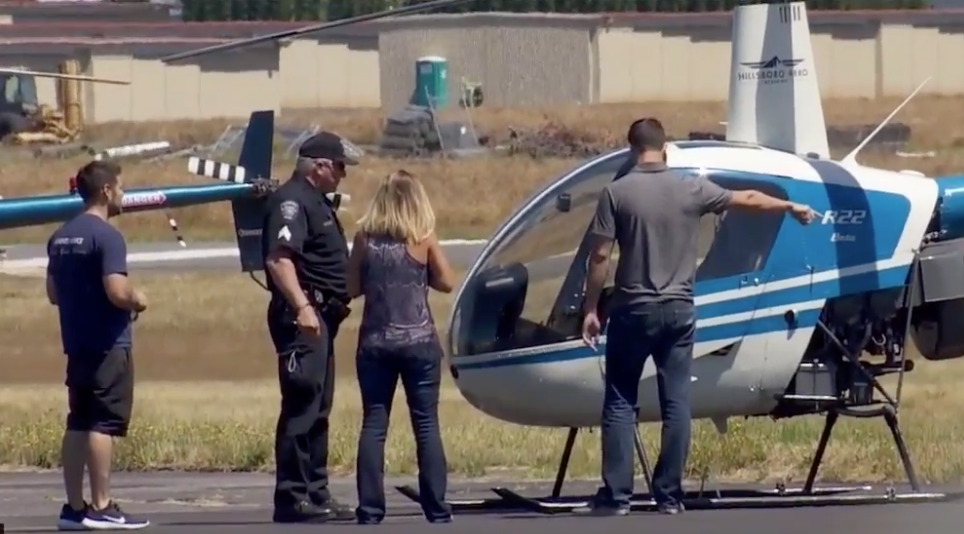 A man who tried to steal a helicopter at gunpoint outside a flight school in Oregon was fatally shot by police on Monday. The incident began when a man wearing a gray hoodie, with the hood up, approached the Hillsboro Airport’s chain-link fence and climbed over. An observer, who was there with his family to watch the planes, told police, “For a moment, I thought to myself that it was a little warm for the big, thick, gray hoodie with the hood over him,” according to the Oregonian. The man told reporters when the man jumped the fence, he rushed his family into the car and left the scene.

At 11:23 a.m., the man went up to a helicopter with a flight instructor and student inside as it was parked with its rotor spinning at Hillsboro Aero Academy, Lt. Henry Reimann, a Hillsboro police spokesman, told the Oregonian. The man opened the door, pointed a gun at the student and ordered the student out. When the student hesitated, the man fired the gun away from the helicopter and the student got out and ran away, Reimann said. The gunman then went to the other side of the helicopter and pointed a gun at the instructor. He ordered the instructor out and then jumped in. “According to the sergeant that approached, it appeared he knew what he was doing in the cockpit,” Reimann said. Employees from Hillsboro Aero, armed with personal firearms, and a police officer approached the helicopter and held the man at gunpoint. The suspect fled, going back over the fence, across the road and into a field.A Hillsboro police officer encountered the man there and shot him, Reimann said. The man died at the scene.