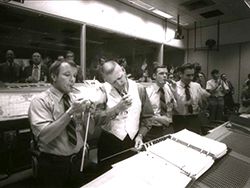 Last Friday, the Aero Club New England bestowed its Godfrey L. Cabot award to Joe Gavin and Gene Kranz. Gavin was the Director of the Lunar Module Program for Grumman, and Kranz was the Flight Director for the Apollo missions. (He was the guy in the vest played by Ed Harris in the film Apollo 13.) Gavin spoke briefly, making some good quips about developing “a flying machine we couldn’t flight test” and how working to get the crew of Apollo 13 back alive was “the longest time without sleeping I’ve ever faced.” But it was Kranz’s presentation that stole the show.

Kranz framed the plight of Apollo 13 by noting that there wasn’t a single Mercury mission that didn’t have a major problem to solve and that both Apollo 11 and 12 had been “a bit sporting.” Apollo 11 landed on the moon with 17 seconds of fuel remaining, and Apollo 12 lost an engine on liftoff. His presentation described the gut-wrenching decisions that ultimately were his call to try and bring back three men in a crippled spacecraft over 200,000 miles from home. For example, they chose to sling the crew around the moon rather than attempt to reverse course (because Kranz had a gut feeling the rocket needed for that might be damaged) even though that path was a day too long for the astronauts to survive. They figured out how to shave a day off the return later.

Below are some of the slides from Kranz’s presentation. His bestselling memoir, Failure Is Not an Option, tells of his experiences in 37 years at NASA.