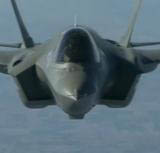 Canada has committed to buying 65 F-35 Joint Strike Fighter aircraft to replace its 30-year-old fleet of about 120 CF-18 fighters. The aircraft order itself is worth $9 billion, including training, new equipment for air bases and simulators, and a maintenance contract with Lockheed Martin will push the total cost to about $16 billion. Canada is one of eight countries taking part in the development of the aircraft and some of the money spent on the aircraft will go indirectly to Canadian companies. Nevertheless, the choice of the Lightning II and the way in which it was chosen ignited political debate in Canada that could result in an election if the current Conservative government’s political rivals dig in their heels.

The opposition parties are particularly upset that there was no tender process and the contract was awarded directly to Lockheed Martin. Canada bought new C-17 and C-130 transport aircraft through a similar process in 2006. The current structure of the Canadian government means that the government’s decision could be quashed if all three opposition political parties vote against it in Canada’s parliament. A vote like that would bring down the government and force an election. But it’s not just political opposition facing the purchase. Canadian media commentary is full of criticism of the aircraft itself, saying it’s an unnecessarily complex airplane whose short range will be an issue in its primary role of long-range sovereignty patrols.