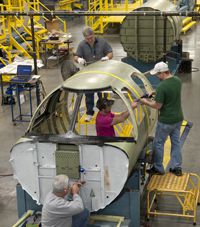 The FAA has certified the upgraded Cessna Grand Caravan EX and deliveries are already under way. The core of the upgrade is a much more powerful (867 shaft horsepower) Pratt and Whitney Canada PT6A-140 engine in place of the 675-horsepower Pratt that powers the standard models. The effect on performance is substantial. Cessna was hoping for 20 percent better climb rate but it turned out to be 38 percent. The souped-up Caravan is expected to be especially popular for float operators and those who do a lot of high and hot operations. In recent years several companies have obtained STCs to replace the original Caravan engines with more powerful mills. Meanwhile, Cessna has also started production of a brand-new airplane, the M2 business jet.

The M2, which has a lot in common with the CJ1+, was announced in 2011 and first flew in March of 2012. Certification is anticipated by this coming summer. Major components of the airframes will be built at Cessna’s Wichita plant and then shipped to Independence, Kan., for final assembly. The M2 has a Garmin G3000 avionics suite and is powered by Williams FJ44-IAP-21 turbofans. Cessna says it climbs to 41,000 feet in 25 minutes and has a cruise speed of 400 KTAS.