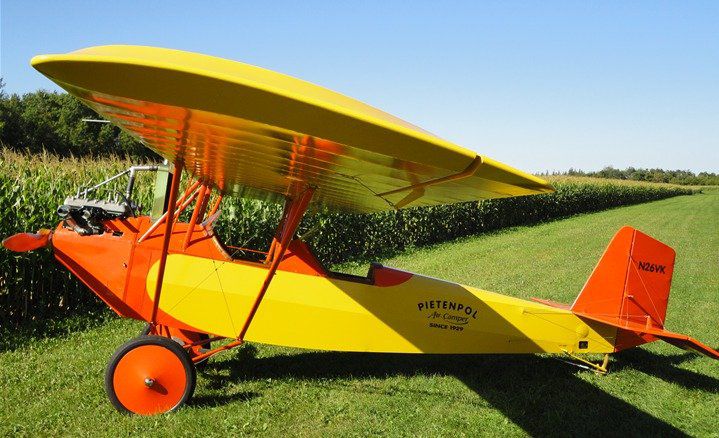 The Pietenpol Aircraft Company has been selling plans to its Air Camper design since 1929, and now builders can also buy kits. The two-seat Air Camper was designed to be built from spruce and plywood, “an affordable airplane that could be built by the common man with materials that could be purchased in a hardware store/lumber yard,” the company says. It can be powered by an automobile engine, and requires no aircraft-specific parts. During the 1930s and ’40s, the company offered do-it-yourself kits for sale, but for the last 60 years, none have been available. Now the company has created six component kits, sold through Aircraft Spruce and Specialty, with prices starting at $17.50 for the vertical stabilizer kit and peaking at $1,184 for a wing kit. “Sales have been steady right out of the gate,” Andrew Pietenpol told AVweb this week. “My phone and emails are going crazy.”

His grandfather designed the airplane to be a do-it-yourself project, Pietenpol said. “The design allows the builder to pay as they go, and to build at theirown pace, skill, and comfort level, while avoiding debt,” he said. “This philosophy has not changed in over 86 years.The builder must still supply engine, covering, and hardware.The plane is as popular today as it was over 86years ago.” EAA has an Air Camper on display in its museum in Oshkosh, Wisconsin. “In 1994, Bernard H. Pietenpol was inducted into the EAA Homebuilder’s Hall of Fame for his pioneering work in designing a homebuilt aircraft and fostering the ‘scratch-built’ airplane industry,” the museum website says. “In fact, Pietenpol is considered by many to be the ‘Father of Homebuilt Aircraft.'”