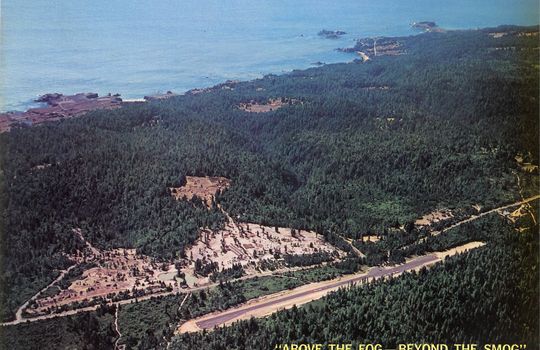 Now that flying weather is here, the fight to save a tiny northern California airport is kicking into high gear with a crowdsourcing fundraising program. As we reported in February, the Bower family, all of them non-pilots, launched a nationwide campaign to raise the $60,000 needed to put an asphalt slurry coating on the runway at Ocean Ridge Airport near Gualala, on the rugged coast of Mendocino County. They’ve since raised about $15,000 and have initiated a campaign on Smallknot, a crowdsourcing enterprise aimed at supporting locally owned businesses, to take it the rest of the way by the deadline of Sept. 30, 2014. Julie Bower, whose family has operated the private airport for more than 30 years, said she believes the fundraiser is a first. “I’m not aware of any other private airports using this tactic yet,” she said.

The airport was built in the 1960s as the focal point for a fly-in golf resort in the idyllic setting 1,000 feet above the oceanfront town. The project failed and Bowers’ husband’s father acquired the property in the 1970s. Since then, the family has maintained the airport as a community service but time and the tempestuous weather of that area finally caught up to the aging infrastructure. An inspection by Cal Trans, the state transportation authority, resulted in the order to fix the crumbling runway and bring the markings into regulatory compliance. There are about 10 based aircraft and transient aircraft number about 10 a day in the summer tourist season but the airport is also an important community asset. Because it’s high above the waterfront, it’s often free of the fog that envelops the coast and makes it accessible to medevac and emergency services aircraft.