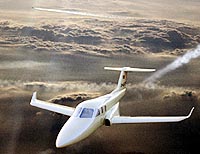 Diamond Aircraft’s president, Peter Mauer, is making it sound like the future of the company may be hanging on a $35 million Canadian loan that, as of Friday, may or may not be coming. The loan would help launch production of Diamond’s D-Jet, save 200 jobs and create 500 more in London, Ontario, where the unemployment rate is currently near 8.5 percent. Roughly half of Diamond’s workforce is currently dedicated to the jet, which has amassed more than 230 firm orders. According to Mauer, without the jet the company’s debts would be “very difficult to satisfy” based on depressed piston sales. And “I’ll let you do the extrapolation,” he told the Financial Post.

Diamond has gathered $20 million in private funds and an additional $35 million from the Ontario government. But the Ontario money is contingent on Diamond securing the separate $35 million Canadian loan. According to Mauer, “The federal level is the very last piece in the puzzle.” If the loan is approved and added to previously committed funds, it would bring the total Ontario and federal government investment to $100 million. A spokeswoman for the Canadian government said last week that a decision is pending.