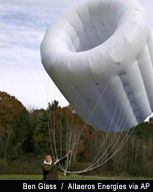 Regulations and technological restrictions suggest it may not happen very soon, or at all, but some researchers believe aerial turbines will be tapping high-altitude winds for power generation sometime in our future and perhaps within the decade. For researchers, the mother lode would be to maintain flying electric generators in the jet stream. Scientists estimate the energy there could provide for current worldwide power needs 100 times over, annually. That doesn’t mean it could happen and, for now, developers are focusing on developing tethered products for deployment at altitudes below 2,000 feet. According to some, the question isn’t “if” these products will start popping up, it’s “when.” And, for proponents of the technology, the answer to that is sometime within the next five or six years.

That said, companies currently working on the project seem very loosely formed. They are in the development phase and are aware of federal airspace restrictions. One company, Altaeros Energies, believes it can bypass many restrictions by focusing on altitudes of 2,000 feet and below, according to an article published Thursday by The Associated Press. At that altitude, winds are typically about two and one half times stronger than they are at 350 feet, where a more typical wind turbine might reach, according to researchers. Proponents say the aerial turbines will be smaller, less costly and cheaper to build and deploy than conventional windmills. Through wide-scale use, they imagine associated energy costs could drop to 2 cents per kilowatt hour from the 9- to 10-cent range associated with land-based turbines. Companies currently researching the technology include Altaeros Energies and Sky WindPower — neither of which have much of an Internet presence. Video of one of their test products is available here. No company has yet demonstrated the ability of their turbines to fly continuously and unsupervised for extended periods of time.