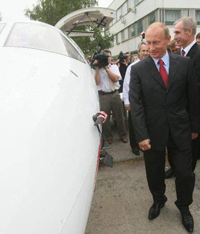 Russian officials have given their OK to allow the construction of a factory in Ulyanovsk, Russia, where copies of the Eclipse 500 jet will be assembled, Eclipse Aviation announced on Tuesday. The Russian State Bank, chaired by Russian Prime Minister Vladimir Putin, will finance the project in full, providing $205 million in return for a share of the enterprise. “Obtaining this approval and financing is an enormous step forward in our efforts to globalize the Eclipse 500 and create a highly competitive worldwide business model for Eclipse Aviation,” Eclipse CEO Roel Pieper said in a news release. Components of the jet will be manufactured elsewhere and shipped to Russia for assembly. The factory will be built in Ulyanovsk, and is expected to be ready to start production in 2010. Workers will build up to 800 jets a year. The factory in Albuquerque will continue to work at full capacity, the company said.

The new facility will be operated by European Technology and Investment Research Center (ETIRC) Aviation, which is the exclusive provider of sales, customer service, maintenance support and flight training for the Eclipse 500 in Europe, the Russian Federation, the Commonwealth of Independent States and the Republic of Turkey. Eclipse CEO Pieper is also the chairman of ETIRC Aviation.