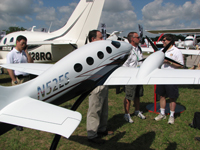 Epic Aircraft is planning to expand its Bend, Ore., operation as it goes for certification of the LT single-engine turboprop. The Associated Press reported the kit builder is negotiating with Cessna to buy the building Cessna abandoned two years ago when it consolidated manufacturing of its Corvalis high-performance singles in Wichita. The Bend City Council has approved transfer of the land lease from Cessna to Epic. Epic CEO Doug King said the expansion is needed because of growth in the kit business and because of the certification effort. “We expect to hire 40 to 80 new staff in 2013,” he said in an email to the Bend Bulletin. “Our commitment to Bend continues.”

Epic was on the verge of collapsing until a group of aircraft owners with partly built kitplanes banded together to win control of the enterprise. Since then, most have finished their aircraft and the company is now building parts for new kits. Earlier this year, Epic was acquired by Engineering LLC, a Russian firm that announced the certification bid. Epic has job postings on its website relating to the certification bid.