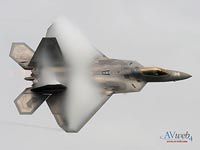 The Obama administration has taken a look and after production of 187 aircraft, “the administration proposes to terminate the F-22 Raptor program,” and close the Raptor production line. The quote comes straight from the Terminations, Reductions, and Savings report offered up by the Office of Management and Budget (OMB). The Raptor program costs the United States about $3.5 billion per year, according to the OMB, and the proposal would halt production after 2009, when the current multi-year procurement contract ends. The OMB states that the 187 examples of the F-22 Raptor air superiority fighter, supported by the planned fleet growth of Joint Strike Fighters (JSF) to 2,443 aircraft, “will meet DOD’s requirements to maintain air superiority.” And, according to the OMB, the Department of Defense agrees. But while the F-22 has frequently been attacked for its expense it has rarely (if ever) been attacked for its demonstrated real-world abilities. The JSF is a different story, but does come with at least one distinct advantage.

Versions of the JSF are destined for sale en masse to foreign governments and as such, the JSF program is seen by some as vital to the U.S. recapitalizing tactical aircraft. With the GAO and Congressional budget office both questioning the affordability of continuing the F-22 program while simultaneously pursuing the larger JSF procurement, that factor may be critical. Still, the JSF is still a project in development and as such its cost figures are still somewhat malleable — they may grow larger. With the proposal to cut the F-22 on the books, critics and proponents of both aircraft may find new urgency in their voices. We’ll be listening.