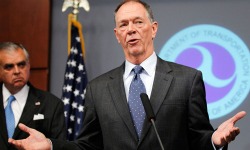 The following release was posted Dec. 6 to the FAA website under the title, “Statement from Randy Babbitt.” That statement follows, here, in its entirety:

Today I submitted my resignation to Secretary Ray LaHood and it has been accepted. Serving as FAA Administrator has been an absolute honor and the highlight of my professional career. But I am unwilling to let anything cast a shadow on the outstanding work done 24 hours a day, 7 days a week by my colleagues at the FAA.They run the finest and safest aviation system in the world and I am grateful that I had the opportunity to work alongside them. I am confident in their ability to successfully carry out all of the critical safety initiatives underway and theimprovements that the FAA has planned. I also want to thank Secretary LaHood for his leadership and dedication to the safety of the traveling public.

At about 10:30 p.m., Saturday, Babbitt was seen driving on the wrong side of the road and was pulled over. He was taken into custody by Fairfax County police and charged with driving while intoxicated. Babbitt was alone in the car at the time and no accident related to the incident has been reported. After being taken to a local jail, the former administrator was released on a personal recognizance bond. He now faces a Feb. 2 court date. Transportation Secretary Ray LaHood Tuesday expressed disappointment that he’d found out about the event through news reports. Deputy administrator Michael Huerta is now serving as acting administrator of the FAA.

Fairfax City police operate under a general order that forces them to release “any criminal charge or serious traffic charge.” Those charges include driving under the influence and reckless driving. The police do not need to release the administrator’s blood-alcohol level. Virginia state law defines driving while intoxicated (DWI) as operating a motor vehicle with a blood alcohol concentration of .08 or higher. Babbitt flew 25 years for Eastern Airlines and was sworn in to lead the FAA on June 1, 2009. He was about halfway through his five-year term.