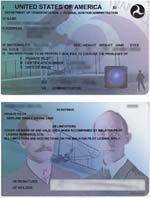 The FAA will publish a new proposed rule in the next few months that would require pilot certificates to include a photo, an FAA spokesperson said this week. Currently, pilots are required to carry a government-issued photo ID in addition to their pilot certificate. U.S. Rep. John Mica, R-Fla., recently wrote to the FAA, the TSA and the Department of Homeland Security asking why they haven’t complied with a 2004 law that requires pilot certificates to include not only a photograph but a means to record biometric data such as fingerprints and iris scans. The FAA’s Sasha Johnson said the FAA will release an NPRM by the end of this year, according to The Associated Press. She also said that the current plastic certificates already are capable of holding biometric data, although no such data currently is required.

“It is mind-boggling that six years [after passing the law], after spending millions of dollars, the FAA license still does not have a photograph,” Mica wrote. “The only pilots pictured on the license are Wilbur and Orville Wright. … It is absolutely astounding that DHS, TSA and FAA could, after six years to implement the [law], still achieve such an incredible level of incompetence.”