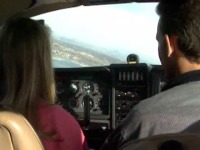 Obtaining a pilot certificate in popular training areas of the Southwest may get more expensive thanks to a decision by the FAA to limit the number flight tests designated pilot examiners (DPEs) can administer. FAA spokesman Ian Gregor confirmed to AVweb that the agency has capped flight tests for DPEs under the authority of the Scottsdale and Las Vegas flight service district office (FSDO). “The FAA routinely reviews procedures, policies and programs to ensure they are operating safely, efficiently and properly,” Gregor said. “A review of our Designated Pilot Examiner (DPE) program identified potential issues with DPEs who conduct a high number of pilot flight checks. As a result, the FAA’s Western Pacific Region is limiting DPEs in two locations — Las Vegas and Scottsdale — to conducting 50 flight checks per quarter, or 200 per year.” Gregor declined to specify what led to the action but Fred Gibbs, a flight instructor in Flagstaff, said the result will come right out of the pockets of his students. “The examiner intends to raise the rate from $450 to $700 to make up the lost income he will incur as a result of the fewer number of flight tests he is allowed to administer,” Gibbs said.

Gibbs said his understanding is that some DPEs in Las Vegas were doing two or three exams a day and there were questions raised about the thoroughness of the tests they administered. He said the cap on flight tests could also lead to longer wait times for students ready to take their rides. He said the policy will also burden already-taxed FSDO staff with monitoring DPE activity, which may compound the delays facing students.