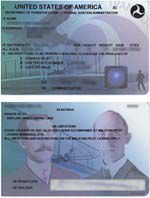 The FAA proposed a rule Thursday that would put your picture on your pilot certificate and (for most pilots) will remove the current requirement to also carry another photo ID; it extends to students and it will cost you something. The agency has the authority to charge a maximum fee of $22 for renewals and proposes to charge that entire fee to add photos to existing certificates. The cost of issuing, upgrading or adding ratings had previously been absorbed by the FAA. The FAA says the new fee will not cover the cost of adding photos to existing certificates and the agency proposes to adjust the fee periodically based on the Consumer Price Index. The FAA also expects designees, used to accepting and verifying photo-certificate applications, to also charge a separate and uncapped fee. Pilots would need to renew their photo certificates every eight years. The Notice of Proposed Rulemaking (NPRM) (PDF) explains that the proposal is a response to the Intelligence Reform and Terrorism Prevention Act. The proposed timeframe for compliance varies depending on your ratings and activities as a pilot.

The FAA plans to transition pilots to photo certificates with a combined approach. Once the rule goes into effect all new certificate applicants will be paying for the new photo-certificate. The FAA’s fees for issuing a first airman certificate (not a renewal, replacement or upgrade) could cost up to $50 and “the FAA would decide whether additional rulemaking is necessary.” Current pilots would be transitioned either by a “triggering event,” which includes pilot/FAA interactions like picking up a new rating or flight instructor certificate. Beyond that, ATPs would have three years to obtain a photo certificate; commercial pilots would have four years; and private, recreational and sport pilots would have five years. The measure is an extension of the requirement of pilots to obtain plastic certificates. Comments on the NPRM will be accepted for 90 days from the pending date of publication in the Federal Register.