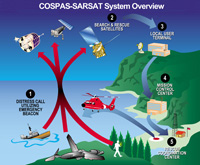 The FCC has stayed their rule (PDF) on the prohibition of 121.5 MHz ELTs (signals no longer processed by satellites) and is “planning a new Notice requesting public comment on the future of legacy 121.5 ELTs.” The action is a response to concerns expressed by the FAA, one of which is supply. The FAA warned the FCC that the current supply of 406 MHz ELTs is insufficient to replace all 121.5 MHz ELTs in the near term. Because of that, reasoned the FAA, prohibiting the use of 121.5 MHz ELTs “would” effectively ground “most” general aviation aircraft. The FAA also expressed concern regarding the potential continued value provided by 121.5 MHz ELTs in locating aircraft “even without satellite monitoring of frequency 121.5 MHz.” Search and rescue operators still monitor the frequency. The FAA also expressed concerned about the associated cost to operators of forcing a transition.

While future action is expected, “no action will be taken regarding 121.5 MHz ELTs until further notice, following an additional opportunity for interested parties to comment.” The new notice is expected “sometime in early 2011,” according to the Aircraft Electronics Association (AEA). In 2000, Cospas-Sarsat announced it planned to terminate by 2009 satellite processing of 121.5 MHz beacons and has made good on that change. The AEA and user groups had challenged the FCC’s planned prohibition regarding continued use of existing 121.5 ELTs. Only 406 MHz frequency beacons are currently monitored by satellite.