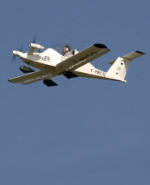 The tiny all-electric four-engine aerobatic aircraft known as Cri-Cri, which is “cricket” in French, has flown for the first time, EADS has announced. The company’s Innovation Works developed the airplane together with Aero Composites Saintonge and the Green Cri-Cri Association. The first flight launched from Le Bourget airport near Paris last Thursday morning. “Take-off and climb were smooth, no vibrations could be felt and maneuverability was excellent,” EADS said in a statement. The project may seem like pure fun, but it has a serious purpose, according to Jean Botti, EADS’s chief technical officer. “The Cri-Cri is a low-cost test bed for system integration of electrical technologies in support of projects like our hybrid propulsion concept for helicopters,” he said. “We hope to get a lot of useful information out of this project.”

The airplane is built of lightweight composite structures to compensate for the additional weight of the batteries, and four brushless electric motors with counter-rotating propellers deliver propulsion with zero CO2 emissions and significantly lower noise compared to thermal propulsion, EADS says. The system is powered by high-energy-density lithium batteries. The company aims for Cri-Cri to deliver 30 minutes of cruise flight at 60 knots, 15 minutes of aerobatics at speeds reaching up to 135 knots, and a climb rate of approximately 1,000 feet per minute. The aircraft was displayed in June at the Green Aviation Show at Le Bourget. It is based on a French homebuilt design from the 1970s.