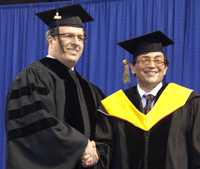 St. Louis University’s Parks College has conferred the first-ever Ph.D. in Aviation in the U.S. to Damon Lercel. The school has been working on establishing the degree for 10 years and the new doctor says it’s an important milestone in aviation education. “The program offered not only an in-depth immersion in research, but also opportunities to interact with both the domestic and international aviation industries.” Lercel said, “It’s a victory for the advancement of aviation.” The degree was also the first for the school.

Dean Theodosios Alexander Sc.D said it’s part of the school’s program to up the ante in aviation and engineering studies. “Parks College is dedicated to excellence in research-led education via building collaborative and inter-disciplinary research capabilities. The doctoral programs in aviation and engineering are part of the foundation for the national and international recognition of Parks College as a leading powerhouse for cutting-edge, industry-relevant and science-driven research.” Lercel’s studies were funded by Dr. Manoj Patankar, the executive director of the Center for Aviation Safety Research at the school.