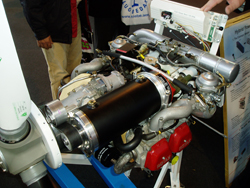 Flight Design GmbH, the German creators of the popular CT line of light sport aircraft, used AERO Friedrichshafen to announce details of their work on a new hybrid engine concept. The propulsion package consists of a standard Rotax 914 turbocharged engine to which is mated a 40-hp (30 kW) electric motor. The electric motor is coupled to the propeller hub using a poly-V-belt drive that has no overloading impact on the crankshaft and, thus, allows the motor to transmit its power directly to the point where it’s needed. Since the basic Rotax is left mostly untouched, its 130-hp output, combined with the electric motor’s 40 hp, provide for a combined 170-hp output for the hybrid. The electric motor will be used for takeoffs and climbs, and makes use of its full capacity over a maximum five-minute span. In cruise, power comes entirely from running the gas engine at full power. Twenty minutes is required for a full recharge on the 25 kilos of lithium ion batteries that power the electric motor.

One of the features being touted by Flight Design is the added safety inherent with a hybrid. Should there be a failure of the combustion engine, power from the electric motor can supplant a stopped engine and provide sufficient thrust to stretch the aircraft’s glide to an emergency landing. Flight Design expects to begin flight testing of its hybrid in one of its existing aircraft by the middle of 2009.