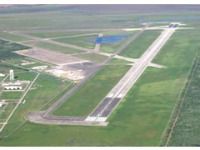 Newly released audio recordings detail first-hand witness accounts of Sen. James Inhofe’s (R-Okla.) October 21 landing on a closed, marked and occupied runway in south Texas, and suggest runway workers may have had reason to fear for their lives. Three separate audio segments have been made available through a Freedom of Information Act request, along with a section of an incident report. AVweb has merged the audio segments into one file, available here (MP3). And the Incident Report is here (PDF).

In the recordings, runway crew supervisor Sydney Boyd said that Inhofe touched down, then “sky hopped” his 1978 Cessna 340 plus three passengers over personnel and six vehicles before landing. Boyd commented that the aircraft “damn near hit” one red truck. The Incident Report notes that, while en route, Inhofe told a controller he “was familiar with NOTAMS.” (His comments made after the event may suggest otherwise.) It also states that airport employees heard the Senator call-in on the UNICOM, but did not respond or alert him of the runway closure prior to his landing.

Listed in the incident report are recommendations for “systemic corrective action” that include publishing NOTAMS in plain english and making sure UNICOMs are manned while people or equipment are on the runways. The report states that “NOTAMS are sometimes difficult to read and understand” and “pilots may be more apt to check” them if they were easier to understand. As for Inhofe, the FAA’s investigation yielded no legal enforcement action. The Senator was required to go to “remedial training” (PDF), which he has since completed. In response to the release of these latest details, Inhofe offered a statement which says in part, “This is an old story, and the FAA and I have long consider the matter closed.” Inhofe expressly noted that he has not admitted to a violation and says he was “cleared to approach by the FAA prior to landing on the runway.”