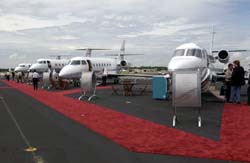 Gulfstream Aerospace Corporation announced this week that the FAA will allow its two newest aircraft — the long-range G450 and mid-range G350 — to share the same pilot type rating with the company’s ultra-long-range models, the G550 and G500. Since the G550 and GV already share the same type rating, the GV pilot rating will apply to the four new aircraft as well. GV pilots will be authorized to fly the G500 and G350 aircraft upon completion of a five-day “differences” course that highlights the PlaneView flight deck. GV pilots who are not already qualified on the Gulfstream Enhanced Vision System (EVS) will also be required to complete 14 hours of training on the Head-Up Display (HUD) and the EVS to fly the G550 and G450, both of which include EVS as standard equipment. All pilot training is offered at FlightSafety International in Savannah, Gulfstream’s preferred provider of crew-training services. Europe’s Joint Aviation Authorities (JAA) is expected to announce a similar ruling in the near future. “We are delighted the FAA agreed that the G450 and G350 will share the same pilot type rating as our ultra-long-range jets,” said Bryan Moss, Gulfstream’s president. “A number of our customers operate multiple Gulfstream aircraft, each with its unique price and performance point, to meet their varying travel needs. Now with the shared pilot type rating, they can do so without having to match pilots to aircraft’ or spend additional time and money to retrain already well-trained pilots.” The first G550 was delivered to its owner in September 2003 while the first delivery of a G500 is expected later this month. Gulfstream introduced the G450 at the 2003 NBAA annual convention; five months later, the G350 was unveiled at the 2004 Asian Aerospace exhibition in Singapore.