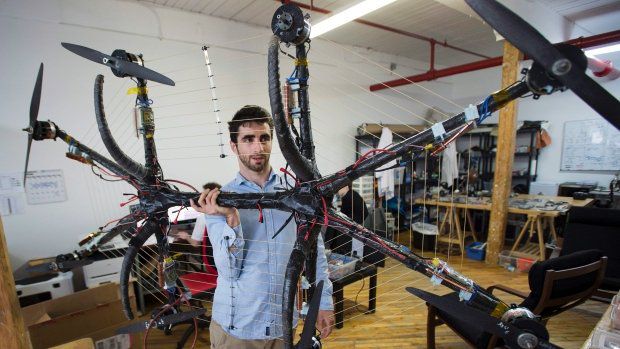 A Canadian company hopes to have a consumer “hoverboard” on the market by Christmas, a little more than a year after setting a Guinness record for flying a prototype of the device almost a thousand feet. Alexandru Duru, a Montreal software developer, stood aboard the hoverboard and flew about 20 feet high over Lake Ouareau, about 90 miles north of Montreal in August of 2014. He told CBC Newshe submitted a video in support of his claim for a Guinness record. He only had to fly 164 feet to earn the record and Guinness confirmed the record and released the video on Friday. It shows Duru carefully and slowly flying over the water gingerly shifting his weight to change direction. Since that flight, he and his business partner Philippe Maalouf have been refining the design and getting ready to launch a commercial version. From images and videos it appears that the device is large but lightweight octocopter with individual batteries powering motors on each rotor. A handheld controller is part of the package. We didn’t get a response to our request for more specific technical details of the hoverboard.

Duru said the hoverboard (the trade name wasn’t released) will be manufactured outside of Canada and the final design is close. They hope to have it on the market in six to seven months and say it will be an luxury leisure toy that will share space in the garage with the boat, kayak and ATV. “You can fly it anywhere, over water, in the wild,” he told CBC. However, there will be a steep learning curve for those who buy the device because of the inherent instability of standing upright and controlling it with the pilot’s feet. “This thing is still quite dangerous,” he said. The consumer version will have a digital altitude lock that will limit flight to five feet above the ground or water.