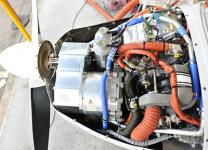 Among the technological demonstrators being shown at the Paris Air Show, is the DA36 E-Star — a two-seat, low-wing motorglider powered by a serial hybrid electric drive. The aircraft, a modified Diamond HK36 Super Diamona, first flew June 8. It was developed by Siemens, EADS and Diamond Aircraft of Austria with a goal of reducing fuel consumption and emissions by 25 percent. It carries a serial hybrid drive that turns the aircraft’s prop with a Siemens 70kW electric motor. An onboard 40-hp Wankel rotary engine provided by Austro Engine serves as a generator (only) and kicks in to keep the batteries, provided by EADS, fed. There are no specific plans for the drivetrain … but there are general ones.

The DA36 was designed specifically to be as fuel efficient as possible while working with an established airframe (a modified Diamond HK36 Super Dimona). Because the electric motor can be the only one running for takeoff and climb, the system can significantly lower an aircraft’s noise signature during that phase of flight. The pilot benefits from lower vibration and noise in all phases of flight. That, plus the reduced emissions, makes the design a particularly good neighbor to noise and environmentally conservative areas. The companies that created the DA36 expect the system to be upgradable as technology improves the weight and capacity of batteries and electric motors. They say that while they have no immediate plans for the system, they expect the new drivetrain to be used in larger aircraft at some time in the future.