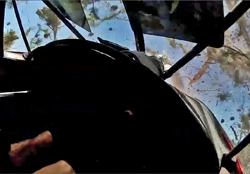 Video that made its way to YouTube early this month shows the June 30 crash of a Stinson 108-3 as filmed by an occupant sitting right seat in the cockpit. (Click the image at right for video.) All four aboard survived the crash and the NTSB is collecting information. The aircraft came down near Bruce Meadows airstrip near Stanley, Idaho. The strip offers 5,000 feet of grass and dirt at an elevation of 6,370 feet. Weather at the time of the accident included an altimeter setting of 30.00 inches Hg with a temperature of 27-degrees Centigrade and a dew point of three. The observations result in a density altitude of 9,167 feet. The four had flown into the airstrip earlier in the day and had reportedly gone hiking before attempting their departure. The video shows that the aircraft becomes airborne before settling to the ground and then gaining altitude. A passenger told the NTSB the Stinson never made it more than about 70 feet above the treetops before settling again — this time, into the trees.

FAA records indicate the pilot of the accident aircraft, Les Gropp, held a commercial pilot certificate. The NTSB noted Gropp’s injuries as serious while the other three men suffered minor injuries. Gropp had been involved in another accident in 2010, also while flying a passenger. In that incident, Gropp found himself low on fuel and elected to land the Cessna 150D he was flying at an alternate airport short of his planned destination. The aircraft reportedly attempted a landing at Smiley Creek airstrip, where the runway was covered in snow and flipped over almost immediately. Neither Gropp or his passenger were seriously injured. The NTSB is in the initial phases of investigating regarding the more recent accident. Watch and listen carefully and you will see the aircraft struggle to get airborne and climb before losing altitude, dipping its wings and impacting trees. Video continues through the entire crash sequence. Find the preliminary report here (PDF) and watch our video analysis here.