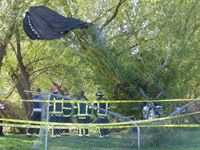 Two men suffered minor injuries Friday when the Maverick “flying car” they were in crashed in an elementary schoolyard in Vernon, British Columbia, Canada. Children had just started classes for the day and no one on the ground was hurt. Ray Seibring, the pilot, and passenger Ed Haaskyk were on a demonstration flight of the aircraft, which is essentially a large powered parachute whose chassis is street legal. AVweb’s Russ Niles was scheduled to fly next in the Maverick and witnessed the crash sequence, but not the actual impact.

Niles said the aircraft had just turned base to return to the airport to pick him up when the fabric wing seemed to get a little ahead of the chassis. “It, for lack of a better description, spun about a revolution and a half before dropping quickly out of view,” he said. “I heard the engine go to full power and then an impact noise.” The car part tore through the chain-link fence that surrounds the school playing field and came to rest in a thicket of trees next to a creek. Witnesses said the occupants got out of the wreckage themselves and did not appear to be seriously injured. Investigators will have video footage from two onboard cameras and data from a flight data recorder to study in their review of the crash. The Maverick is built in Florida but Seibring is from Kelowna, B.C., about 30 miles south of Vernon, and was flying it on a temporary permit from Transport Canada.

This was the first crash of a Maverick, although another developer of the vehicle, Steve Saint, was injured in a ground accident when he was hit in the head by an aluminum wing being tested for another project. For comparison purposes, the Maverick is best considered a powered parachute and the NTSB says there have been 59 accidents, eight of which were fatal, in the past 10 years. That makes the percentage of fatal accidents a little lower than average for GA accidents.