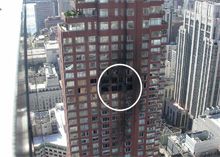 The pilots’ inadequate planning, judgment, and airmanship in performing a 180-degree turn in a limited space was the probable cause of the Cirrus SR20 crash last October that killed Yankees pitcher Cory Lidle and his flight instructor, the NTSB said on Tuesday morning. The Board’s final report says it was not possible to determine who was manipulating the controls at the time of the crash. “This accident is a great tragedy in which a pleasure flight went horribly wrong and ultimately cost the lives of two young men,” said NTSB Chairman Mark Rosenker. “The pilots placed themselves in a precarious situation that could have been prevented by better judgment and planning.” The Board told the FAA that it should permanently prohibit VFR flight for fixed-wing, nonamphibious aircraft in the New York East River Class B exclusion area, where the accident took place, unless those operations are authorized and being controlled by air traffic control. An animation posted online shows the aircraft’s flight path. The NTSB also noted that, due to the lack of a cockpit voice recorder or a flight data recorder, it was not possible to determine who the pilot in control was during the accident flight or if flight instruction was being given. Further, the Board said it didn’t find any system, structural or engine malfunctions in the aircraft. Both pilots were also properly certificated to fly the airplane. The pilots should have recognized, during preflight planning or while they were considering flying up the East River after they were already in flight, that there was limited turning space in the East River exclusion area and they would need to maximize the lateral distance available for turning, the NTSB said.