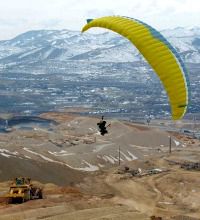 A mountaintop in Utah that’s a popular launch site for paraglider and hang-glider pilots is being destroyed by a mining operation, and the fliers have launched a protest. “This is a jewel, this is a famous place,” said Jonathan Jeffries, a paraglider, at a recent meeting where fliers gathered to plan a mountain-saving strategy. “People come from all over the world to fly here.” The site, known as Point of the Mountain, just south of Salt Lake City, is owned by a mining company, and bulldozers are now infringing on the fliers’ site. The fliers have launched a web site, an online petition, and a Facebook page in an effort to organize support and preserve the mountaintop for recreation.

Chris Hunlow, a sport flier, told the local KSL News the new mining activity will change the ridgeline and disturb the wind flow over the mountain. Jake White, a spokesman for the mining company, said the company is supportive of the paragliders and in the past has agreed to property trades that protected their launch sites. “We’ve begun digging and mining on one of the slopes close by here that is within our property boundaries, but we don’t have plans to go much further than that,” White said. However, “that is where we are catching our lift, is right there,” said paraglider pilot Milly Wallace. “Anything that disturbs that is going to change the flow of that wind.”