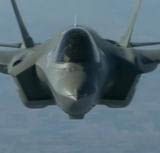 Air Force and Navy variants of the F-35 fighter are progressing, but the Marine Corps’ short takeoff and vertical landing version has been put on a two-year probation and may be canceled altogether if concerns aren’t met. Defense Secretary Robert Gates told reporters, “If we cannot fix this variant during this time frame, and get it back on track in terms of performance, cost and schedule, then I believe it should be canceled.” Citing a Pentagon document, Reuters reported Thursday that the military has reduced its order for the Lockheed jet from 449 aircraft to 325 F-35s through fiscal year 2016, and “cost-cutting efforts were still needed.” The order reduction could save the government more than $10 billion, Reuters reported, and nearly half of that money would head right back into the program’s development to offset cost overruns. Airframes (without engines) are currently priced in the ballpark of $130 million. But that’s nothing compared to the program’s overall cost, which sets a high-water mark for Pentagon arms programs.

The jet program is the Pentagon’s largest arms program, involves eight partner countries and has a cost somewhere near $380 billion. The Pentagon estimates it has invested $37 billion to develop the jet and the development program will cost nearly $14 billion more to complete. The current two-year probation and order reduction means slower delivery and the Pentagon has said it will buy more than 40 Boeing F/A-18s over the next three years to offset the later adoption of the Lockheed effort. Lockheed’s F-35 was meant to be produced in three variants and account for nearly a quarter of Lockheed’s annual revenue. Lockheed says it is still committed to delivering each variant — including the Marine’s STOVL jet.