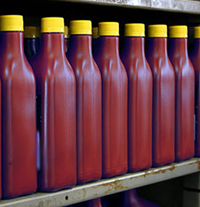 British pilot Jeremy Roswell hopes this November to fly 10,000 miles from Sydney to London in a diesel Cessna 182 burning petroleum fuel processed from waste plastics. The fuel has been developed by Cynar Plc, an Irish company that uses a process called pyrolysis to melt down plastic trash into a petroleum distillate. That product can be separated into various fuels, including a viable aviation fuel, according to the company, which says it has already tested its fuel in cars. Roswell’s flight will require more than 1,000 gallons of the fuel to make his flight. And Cynar will require roughly five tons of plastic garbage to make Roswell’s fuel.The company says its plastic waste diesel fuel is cleaner than conventional Jet A, its production process is cleaner, still,and it estimates a low cost per gallon in production. That said, ithas expressed awareness of some potential limitations.

According to Cynar, its pyrolysis technique, which melts plastics in an anaerobic environment, creates no emissions, and a report published in November 2011 put the cost to produce one gallon of Cyn-Diesel at $1.50. As an aviation fuel, “It’ll need testing and trials, but for a diesel engine not going beyond 8,000 feet, it should be fine,” Cynar CEO Michael Murray told BusinessGreen.com. Roswell plans to cruise at 5,000 feet, flying roughly 13 hours each day. He will attempt to fit the 10,000-mile trip into a six-day adventure with stops at Darwin, Christmas Island, Sri Lanka, Jordan, and Malta. Roswell told the company his objective is to prove the viability of synthetic fuel made from plastic waste “and by doing so replace the need to use fossil fuels from conventional sources.” According to Cynar, there are 26 million tons of plastics feeding U.S. landfills each year, backed by another 15 million tons headed each year to landfills in Europe. Says Murray, “I think [the fuel] can be a viable alternative if the industry adopts diesel-type engines.” One plant that already exists in Ireland can process 20 tons of sorted plastics per day, producing 1.5 million gallons of fuel, according to the report titled, “Converting End of Life Plastic into Diesel The Cynar Experience” (PDF).