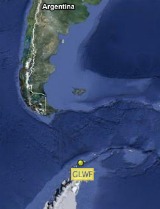 It’s not every day that a light sport aircraft lands in Antarctica, but on Thursday, Matevz Lenarcic touched down there in a Virus SW 914 Turbo, marking the first time a Pipistrel has landed on the continent. His aircraft has been modified with an Intercooler unit to be able to withstand temperatures as low as minus-60 degrees Fahrenheit, Pipistrel said in a news release. Lenarcic is about one-third of the way through a round-the-world flight that launched on Jan. 7 from Slovenia. He plans to fly over all seven continents and take photographs of more than 120 national parks. He’ll also fly above some of the planet’s tallest mountains, including Mount Everest. Lenarcic also is collecting atmospheric data for research during his flight.

Lenarcic will return to South America from the Antarctic, and then launch on another challenge — crossing the Pacific Ocean. “This leg of his flight will include several ocean crossings in excess of 4,000 km [2,500 miles] without a possibility of landing,” Pipistrel said. “Extreme distances and severe weather above the Pacific will be by far the toughest challenge for the pilot and his Pipistrel aircraft, only weighing a little over 300 kg [662 pounds], but we have no doubt that Matevz’s Virus will perform as well in the continuation of his flight as it did up to now,” Pipistrel said.