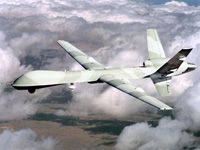 Air National Guard UAV pilots are waging war in Afghanistan from the relative comfort of their base in Syracuse, N.Y. and that prompted a protest at the base and some ethical questions from observers. The Syracuse Guard unit Wednesday became the first in the nation to announce it was remotely operating Reaper UAVs in combat around the clock, according to Syracuse.com. From their Syracuse base (where they used to operate F-16s), the Guard is now flying Reapers loaded with two 500-pound bombs in missions over Afghanistan nearly 24 hours a day and the pilots are going home to sleep in their own beds before starting again the next day. That makes the base — and those homes — a target of the enemy, according to groups that followed up on the news by coming to the base to protest war. It also completely changes the psychological dynamic of deploying for combat. The pilots at the unit who are currently flying Reapers all have a commercial pilot’s certificate, but the Air Force is looking into using “pilots” who have never flown an aircraft from an actual moving cockpit. The news source also reported that the Air Force has apparently taken to this new kind of aerial warfare and will train more UAV pilots this year than the other kind. Training aside, there are those who feel the entire concept raises serious ethical questions.

“We’re going to war without being in war,” director of the Institute for National Security and Counterterrorism at Syracuse University, William Banks, told Syracuse.com. “It’s a very serious ethical challenge,” he added, saying that it necessarily increases “the risk that you’ll have collateral harm or disproportionate harm trying to pick out our targets.” Lindsay Voss, a defense industry analyst with the firm Frost & Sullivan, expressed concerns about making war easier. After all, if fewer people (on our side) are at risk, “does that weigh in our decision to start something?” he asked. One thing is certain, flying remotely piloted attack aircraft keeps more personnel home. Reapers are operated by a four-person team including a pilot, an equipment operator, a communications expert and an intelligence expert. The aircraft can cruise at about 200 mph, fly for up to 40 hours and operate at altitudes up to 40,000 feet.