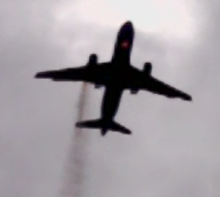 The British Airways Airbus A319 that suffered an engine fire and lost cowlings off both engines on departure from Heathrow took off with its engine cowls unlatched, according to an early report. An Air Accidents Investigation Branch (AAIB) report discussed by Transport Secretary Patrick McLoughlin said the right engine’s cowl door departed the aircraft, but not before striking the engine and fuselage, leading to the engine fire. The cowl on the left wing ripped away without significant additional damage. The emergency, which saw the 80-person flight return to Heathrow for a successful emergency landing and aircraft evacuation, temporarily closed both of the airport’s runways and caused the cancellation of more than 190 flights. The pilots union has already weighed in regarding some of the report’s findings.

The AAIB report states that the event shows failure to latch the Airbus’ cowls “can present a greater risk to flight safety than previously experienced.” Head of safety for the British Airline Pilots Association, David Reynolds, blamed engineers. Reynolds was quoted by Telegraph.co.uk saying, “It is something [for] the engineers to check. It’s their job to make sure they are closed.” Reynolds said that while pilots make a check for obvious anomalies, they could only have noticed a failure to latch the cowl doors “by lying on their back underneath the engines, which is not practical.” Another pilot, who spoke to the news agency on condition of anonymity, said, “The deeper story is in maintenance procedures, management and manning levels.” The pilot said that normal procedures require one engineer to perform and complete the work and another to check it. “Both should have checked whether the cowl was shut,” the pilot said. British Airways is not commenting on the event while the AAIB investigation is ongoing but says it is cooperating with investigators and working with passengers injured during the evacuation.