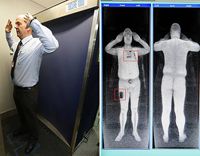 As the Transportation Security Administration’s deployment of backscatter X-ray machines at airports draws increasing public resistance, four University of California researchers say the ionizing radiation used in these devices pose serious health concerns. In early April of 2010, the researchers-all medical and biology specialists- wrote the White House’s science and technology assistant, John Holdren, expressing “urgent” concerns about the safety of so-called Advanced Imaging Technology. TSA has claimed that the scanners expose passengers to less than the equivalent of a chest X-ray, but the researchers say this claim is misleading because of the way backscatter X-rays work.

In a detailed paper submitted to the White House, the researchers identified a number of red flags associated with the use of this technology. Specifically, even though the backscatter machines operate at low beam powers, the majority of their radiation is directed at the skin and underlying tissue, not the entire body. The report says because the X-ray energy is not absorbed by the entire body, the skin dosage may be dangerously high in localized areas, exposure that’s very different than a chest X-ray. Furthermore, they say no independent data exists on the safety of routine use of backscatter machines. The TSA appears to have accepted data from the manufacturers, without benefit of conducting independent risk assessment buttressed by peer-reviewed data.

The researchers’ report indentified several categories of at-risk passengers, including people over 65, women who may be sensitive to mutagenesis provoking radiation, a breast cancer risk and immunocompromised individuals. The scientists urged the administration to assemble an independent panel to evaluate the scanner risk, but thus far, this hasn’t been done, although TSA did engage Johns Hopkins University of Applied Physics Laboratory to perform an engineering assessment. The university claimed the radiation exposure is within safe limits published by the American National Standards Institute. Similarly, it posted a statement from the American College of Radiology claiming that the backscatter machines represent less radiation risk than the flight itself. Neither of those reports addresses the researchers’ point about concentration of radiation on the skin.At least two airline unions aren’t buying TSA’s assurances. The U.S. Airline Pilots Association and the Allied Pilots Association are advising their members to avoid the scanners.