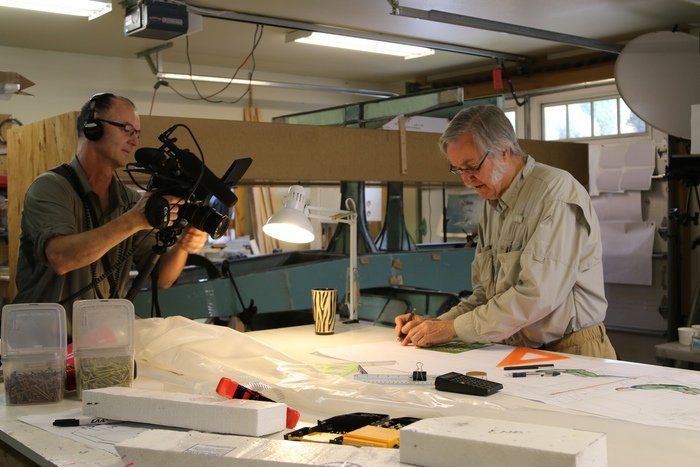 It’s no secret that legendary aircraft designer Burt Rutan has been at work on a seaplane during his retirement in Idaho, but now the airplane is getting close to first flight and new details have been released about the design. The amphibious airplane, called a SkiGull, will be equipped with retractable skis, and will be able to land on water or snow. The skis also will be equipped with small wheels for runway landings. “Imagine an aircraft able to land in large swells near any ocean shoreline and ride the waves to the beach, from where you could hike in for lunch and gas,” Rutan said this week. Goals for the two-seat airplane include a cruise of 170 knots and enough range to fly from California to Hawaii without ferry tanks. It will run on auto or boat fuel, which is easier to find in remote places than avgas. The design update was released on Thursday by a documentary film crew that has launched a Kickstarter campaign to fund a film about Rutan’s life and work.

“Imagine also going to snow fields anywhere there is around 400 feet of relatively smooth snow, or to a dirt patch right at Puma Punku, or any part of the Amazon, including the tiny rivers that feed it,” Rutan said. “Imagine doing an eight-month exploration trip around the world without EVER going to an airport. … I know it sounds like Walter Mitty, but if it flies well [my wife] Tonya and I will explore the world with it, visiting the places you cannot easily get to any other way.” Scott B, co-director of the documentary, says the airplane is “full of other innovations” and more details will be forthcoming soon. Scott B and Sandy Guthrie of Antenna Films also produced Black Sky: The Race for Space and Black Sky: Winning the X-Prize for the Discovery Channel. They hope to raise $80,000 on Kickstarter by March 28 to help fund the documentary, Looking Up, Way Up! the Burt Rutan Story, which they plan to release early next year.