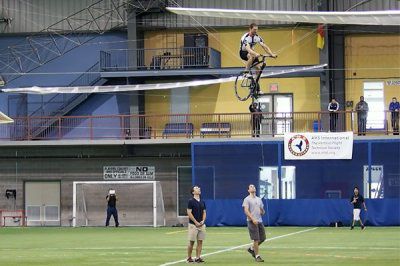 The elusive $250,000 Sikorsky Prize has been won by a Canadian engineering team. AeroVelo‘s Atlas human-powered helicopter satisfied the requirements of the Igor I. Sikorsky Human Powered Helicopter Competition in a flight inside a soccer center near Toronto. The flight occurred June 13 but the announcement was made Thursday after videos of the flight were viewed and verified by the competition committee. The competition was launched 33 years ago and the Atlas was judged to be the first human-powered helicopter to rise out of ground effect to a height of at least three meters (9.8 feet), fly for at least 60 seconds and remain hovering within a 10 meter (32.8 feet) by 10 meter square. AeroVelo’s Dr. Todd Reichert provided the pedal power to keep the huge quadcopter aloft for 64 seconds.

The aircraft is actually larger than any real helicopter and is more than 190 feet across with four 67-foot rotors. It weighs only 115 pounds, including the carbon-fiber bicycle that was modified to transmit the pilot’s power. It made its first flight in August of 2012 and was in a race against other teams from Canada, the U.S., Japan and elsewhere. It took AeroVelos fresh ideas, daring engineering approach and relentless pursuit of innovation-coupled with more than three decades of advances in structures, composites, computer-aided design andaeromechanical theory-to succeed in achieving what many in vertical flight considered impossible,” said Mike Hirschberg, executive director of American Helicopter Society International, which oversaw the competition. It’s not Reichert’s first trip to the human-powered flight record books. In 2010 he provided the power for an ornithopter that flapped about 145 meters.