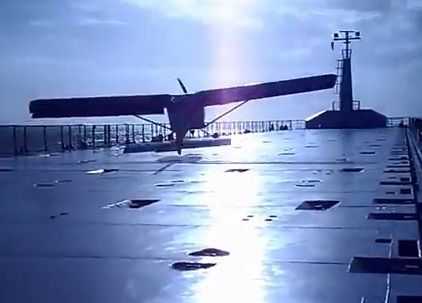 The deck of a cargo ship in the English Channel became a landing site recently for the pilot of a Foxbat Xtreme STOL airplane. The landing, caught on camera from several angles, was a carefully planned stunt by Dutch pilot Jaap Rademaker. “The ship was sailing at 9 knots speed over ground, the true windspeed was 14 knots, just about the full flap stall speed with just myself in the plane and full long-range fuel tanks,” Rademaker wrote at his YouTube site. “What is misleading is that control is perfect at several meters above the deck, but as soon as you get a meter or two above the deck to land, 1) there is curl-over turbulence coming off the bow and sides, 2) you have only some visual reference, like the mast in front. I won’t do it again.” Rademaker took off safely, but only with help from crewmembers who held the airplane struts steady while he powered up, because the tires were slipping on the deck.

The Oct. 17 landing was planned by Rademaker to promote the shipping company, in which he is an investor, according to AOPA. The captain of the ship prepared the deck by filling in recessed eyelets used to lash down cargo, and trimmed the bow as low as possible. Rademaker told AOPA that after he landed, the ship was pitching and rolling, and crewmembers grabbed the struts to keep the airplane away from the rails. He was accompanied by a Cessna 172 chase plane and a rotorcraft with video cameras onboard, and crewmembers on the ship also contributed video.