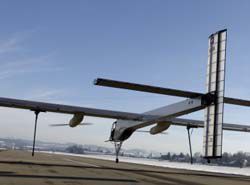 “Finally we can say we are flying a solar plane,” pilot Andre Borschberg, CEO of the Solar Impulse project, wrote in his blog last Friday. The 12,000 solar cells on the wings of the one-of-a-kind aircraft for the first time produced more energy than the aircraft was consuming, providing thrust for the engines with enough power left over to start charging the batteries. “At this precise moment,” Borschberg wrote, “the fulfillment of a dream — to fly solely on solar power, day and night — came one step closer to reality.” The flight was the first time the aircraft was powered solely by solar energy. Borschberg flew twice last Friday, on the first circuit using up the energy that had been stored in the batteries overnight; on the second flight he activated the solar cells for the first time and began to recharge the batteries.

“Never before in my 40 years as a pilot have I experienced anything like this,” Borschberg wrote. The aircraft flew at PayerneAirfield in Switzerland. The project was launched seven years ago by Borschberg and Bertrand Piccard. Their ultimate goal is to fly the aircraft around the world on solar power alone in 2012. They plan to fly five hops in quick succession, weather permitting.