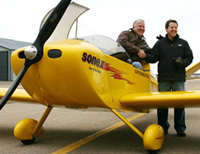 More than three years after its 2007 unveiling (video), Sonex Aircraft’s electric-powered Waiex took its first flight (video) Friday, lifting out of ground effect before settling back down on the runway at Wittman Regional Airport in Oshkosh, Wis. Sonex says the intentionally short hop was intended to analyze “one of the most advanced electric flight packages ever conceived.” If true, that may help Sonex catch Chinese manufacturer Yuneec, which achieved first flight (video) of its two-seat electric high-wing in June 2009, and Randall Fishman, who’s single-seat Electraflyer-C flew at length (video) for the crowd at AirVenture Oshkosh in 2008. Back in 2007, Sonex’s John Monnet said the aircraft would fly for one hour at low-speed cruise or for about 15 minutes in all-out high-performance aerobatic operation. Evolution may ultimately deliver different endurance figures.

Sonex’s aircraft is currently powered by a 54kw brushless DC electric motor. The motor is managed by a proprietary motor controller and fed by a 14.5kw-hour lithium polymer battery group, which is managed by a separate system. For now, flight testing will be limited to deliberate measured steps as the project continues to develop. And progressive testing is expected to continue. The team is already developing its next-generation motor and motor controller designs.