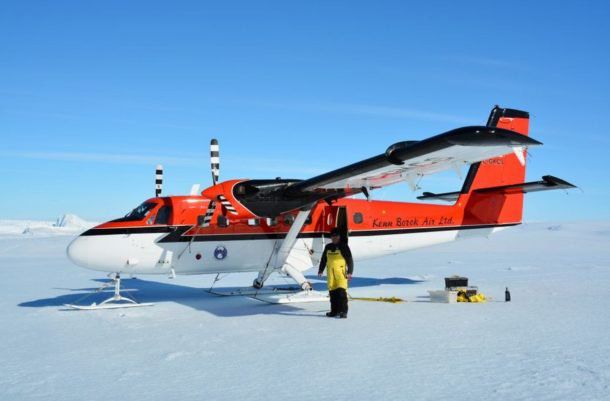 Two Canadian Twin Otter aircraft are in Punta Arenas at the southern tip of Chile waiting out weather to launch a rescue at the South Pole. The aircraft operated by Kenn Borek Air, of Calgary, Alberta, were dispatched last Wednesday to pick up a person who has fallen ill at the Amundsen-Scott South Pole Station. Because of the extreme weather conditions in the southern hemisphere winter, there are no regular flights in and out of Antarctica. But medical officials have determined that the condition of the crew member at the station, one of 48 people living there at this time of year, warrants the complicated rescue.

When the weather looks flyable, the Canadian crews will head from Chile to the British Antarctic Survey Station at Rothera, the northern tip of Antarctica. From there, one of the Twin Otters will make the trip to the pole while the other waits in Rothera in case it’s needed for search and rescue. “You can’t carry enough fuel to go from Rothera to the South Pole and back, so there’s a point of no return on the way in, after about four or five hours, where you have to make a decision that you are pretty sure you’ll be able to land,” said Peter West, a spokesman for the National Science Foundation, which is coordinating the rescue. Kenn Borek Air is a major aviation contractor in Antarctica in the flying season and has done two previous mid-winter rescues. Although there will be no daylight for the mission, there will be a “dazzlingly bright” full moon to help out the crews, according to Crikey’s Ben Sandilands.