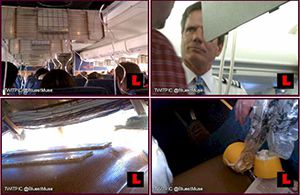 Southwest Airlines Flight 812, a Boeing 737 carrying about 118 people out of Phoenix for Sacramento, Friday, diverted to Yuma Marine Corps air station in Arizona after an in-flight fuselage rupture caused rapid decompression at 36,000 feet. Passengers who called in to local news stations said a six-foot-long gash opened with a loud bang in the top of the cabin. They said the sky was visible through the opening and that some passengers lost consciousness during the rapid descent to 11,000 feet. According to Southwest, a flight attendant was the only one aboard to have suffered an injury. One passenger who saw the flight attendant speculated that the crewmember may have broken his nose. The NTSB has sent a Go Team to investigate the fuselage rupture.

Video showing the extent of the damage to the 15-year-old Boeing 737-300 was posted to YouTube shortly after the event and at least one passenger posted pictures of the damage to Twitter. Several incidents of structural failure leading to a loss of cabin pressure have occurred on U.S. airliners in recent years, including an October 2010 incident involving an American Airlines flight and a Southwest flight in July of 2009. In 1988, a Boeing 737 operated by Aloha Airlines lost a flight attendant when a 20-foot section of fuselage tore away at 24,000 feet. Sixty-one passengers were also injured in that event, which was blamed in large part on metal fatigue.