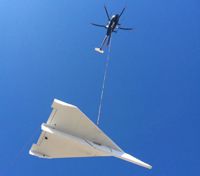 The Pima Air and Space Museum, Tucson, has built and Wednesday flew (sort of) a 45-foot-long paper airplane. The team included Art Thompson as lead engineer. Thompson’s previous projects include work on the B2 Stealth Bomber, and he currently serves as technical director of the Red Bull Stratos Program. But the project also included insights from the 12-year-old winner of a “Great Paper Airplane Fly-Off” that took place in January, hosted by the museum. A first video of the flight, which followed tests of smaller versions, shows the aircraft pulled aloft tethered by a cable to a Sikorsky S-58DT. Once released, the aircraft appears to briefly fly in a condition similar to dutch roll before banking off sharply down and left.