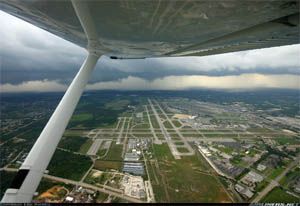 Florida Institute of Technology researchers say that a silent phenomenon called dark lightning can silently deliver to pilots and passengers high doses of ionizing radiation in one sudden burst. Dark lightning is associated with thunderstorms, which pilots usually actively avoid, and occurs at a rate of roughly once per thousand visible flashes, according to researchers. So while researchers note that ionizing radiation is not well received by the human body, they expect that the risk of physical injury from a dark lightning event is slight. But in that case that an aircraft is subjected to the phenomenon, researchers say that all aboard could be exposed to radiation levels equivalent to the safe lifetime limit … or more.

Dark lightning delivers its radiation via X-rays and gamma rays. Researchers so far speculate that many bursts deliver doses similar to receiving a medical CT scan but cite evidence that suggest some bursts may be much stronger. Researchers aren’t yet sure how dark lighting is created. They speculate that thunderstorms may release dark lightning under certain conditions when stimulated by cosmic rays that collide with electrons within the thunderclouds. The collisions, they theorize, create chain reactions that form the foundation of dark lightning bursts, but further study is required. That research will include laboratory and satellite observation, including use of the Fermi Gamma-ray Space Telescope, before a better understanding of the formation and power of dark lightning is better understood.